Lots going on in Ashanti, not least the extension of our microcredit scheme which gives women business training and access to small loans for trading purposes.  It’s wildly popular, and we often get lobbied by women asking for it to be extended to their villages.   When the loans are repaid they can be lent on to other women, perhaps in other villages, so the whole system is very good value.

The picture shows a meeting yesterday in the village of Pentem (famous for making excellent, very loud   drums).  The women, all socially distanced, are being told that they’re going to have a chance to join the scheme.  Apparently they’re very excited. 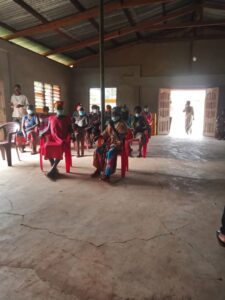 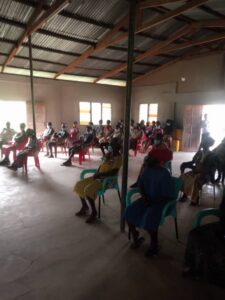 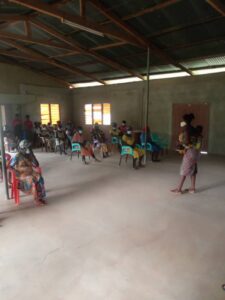 A few months ago one of our donors was kind enough to fund a mechanised borehole for the village of Saviour Benin. Just a few years ago this was a very deprived village, but with the help of clean water, latrines and hygiene training they’re beginning to get on their feet.

The photo shows the bucket queue for water, and also the way the village has organised itself to sell water to other nearby villages. The borehole was very good, and they have plenty of water to spare. They will save the money for maintenance and repair, and will probably soon have money to spare for some project – building a kindergarten for example. 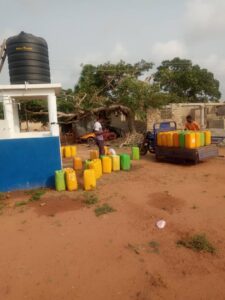 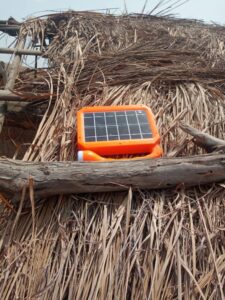 Three years, Swiss charity BasAid helped us run a major drive to tell people about the harmful effects of using battery-powered lamps and kerosene. BasAid funded the distribution of solar lamps as an alternative. Today, the lessons seem to have been learned. Many people have switched to solar power, which of course they can also use to charge their mobiles. These pictures were taken in the villages of Galiba and Mantukwa. 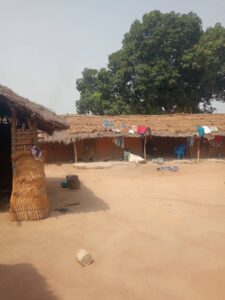 While we’re waiting to know whether Mosi-Kura village’s abandoned borehole can be repaired, the drill rig is getting busy. It will soon be drilling in Ebuoso, a little village in Mampong District that must have never thought it would get so lucky; in Domeabrea, which was recently sponsored for latrines but needs clean water; and in Nkwanta, thanks to the generosity of a new donor whose path we were lucky enough to cross. The rest of this work is funded by Softwire, our amazingly supportive sponsors. The photos show the arrival of the equipment. If geophysics is to be believed, the drilling seems likely to be successful in all three villages, but keep your fingers crossed – you can never be certain. 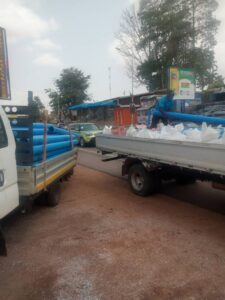 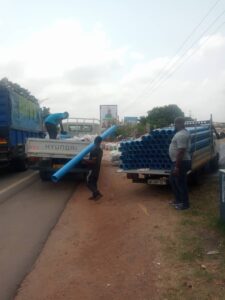 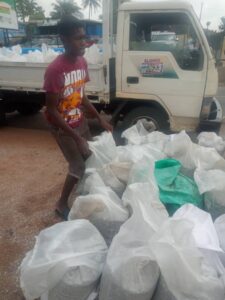 Please support Ashanti Development by shopping at AmazonSmile. This link will connect you directly.
https://smile.amazon.co.uk/ch/1133517-0