Skip to content
Donate now
Nothing much going on in Ghana, but there’s a lot of rain coming down.
Here in London we went to visit the brilliant Orchid Project to ask for some advice on tackling female genital mutilation, which is practised by some of the tribes who are coming south and settling in Ashanti. These include the Fra-Fra, Dagati, Komkomba and probably a whole lot more we haven’t yet identified.
Orchid gave us a video and for starters, we’re going to run this in our clinics for waiting patients, and ask the nurses occasionally to interpret and maybe even to start a discussion. We also decided to try to educate communities about the terrible consequences of FGM at the same time as we’re training them in health and hygiene. It may depend on finding a senior person in the tribe to support us. We’ll have more thoughts later but would welcome any suggestions. 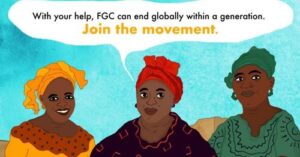 We had a great walk on Saturday, all nine miles of it. Father James of St Pancras Old Church gave us tea, chocolate cake and his blessing before we set off and a record number of people attended – 28. Donations are pushing £2,000 and still going up.
Our thanks to everyone who came and everyone who sponsored a walker. You all helped make it a wonderful day. 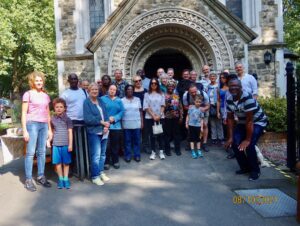 We are lucky to include BasAid among our donors. The organisation is based in Basle and funded by chemical and other major companies.
Not only have they funded many of our projects, but they are now collecting secondhand spectacles and shipping them to Ashanti for our eye clinic. Apparently on days when the clinic is operational queues start to form at 3am. At 8am the queue is closed and people trying to join after that, many of whom have walked for miles to get there, have to go home till next time.
Here is BasAid’s Kwaku Marfo presenting the latest batch of secondhand spectacles to Ashanti Development’s Nicholas Aboagye. 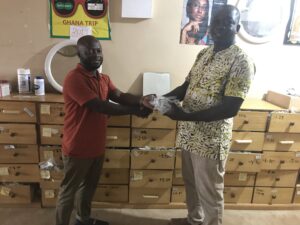 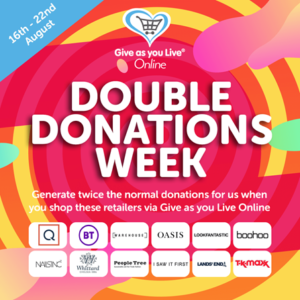 In 2014 we gave one water filter to every household in Mprim village, where we’d lost hope of finding a good location for drilling a borehole. We expected the filters to last for five years and told the villagers many times that they would have to pay for replacements themselves.
In fact many of the filters are still in good condition today, seven years later, and the water authorities have recently extended a pipeline to Mprim. Water only flows in it once a week, but it is just enough to provide drinking water to the community. The filters, which are manufactured by GrifAid, have done a brilliant job in tiding the village over till a better solution came along. 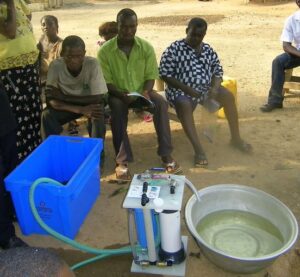