We’re looking for medical staff who’d like to volunteer in Mampong Government Hospital for, say, 2 weeks to 6 months. They’ll have to pay their own fares and vaccinations, but Ashanti Development will provide free board, lodging, washing, internet and transport to and from work.
There are 98 beds in the hospital’s general wing and a further 56 elsewhere. Treatable conditions such as malaria are by far the highest cause of admission to the general wing, followed by anaemia, pneumonia, diarrhoea, typhoid, hypertension and diabetes. There’s a big maternity wing too.
Please tell anyone you think might be interested, and here’s a photo of the hospital. 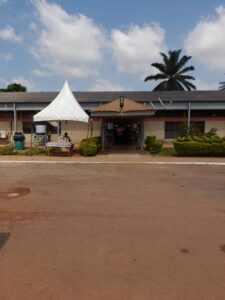