For many years now, Ashanti Development has received grants from a Swiss charity, based in Basle. From time to time, they’d send someone to Ashanti to inspect the way we’d spent their money, and – since the work was carried out by Nicholas – the result was always great satisfaction.
One of the inspectors retired recently. He set up his own charity, and decided to base his operations in Mpantuase/Nkwabrim. There, he commissioned Ashanti Development to drill and commission a new borehole, and also build a storeroom and house for the person who looks after and levies the charges for the water. Here’s a photo of of the house. 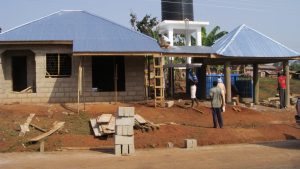