Nyinampong is a large, extremely poor village with very high rates of birth and infant mortality. We’ve been looking for a long time for a sponsor for them – they’ve also been lobbying us hard in case we forgot – but the village is too big for most people to want to take on.

Luckily, a sponsor was recently found for them and latrines are going up everywhere at the rate of knots. We’ve divided the village into two for the purposes of sanitation, and almost all the first half have now been constructed and roofed their latrines, so the masons can finish them off under cover in spite of the heavy rains they’ve been having in Ashanti.

Here’s a picture of one of them. You may think it’s not the most inspiring picture you’ve seen, but the latrine means an awful lot to someone. 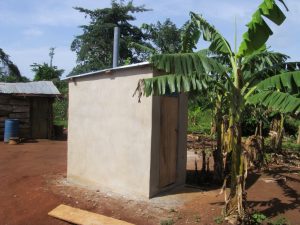