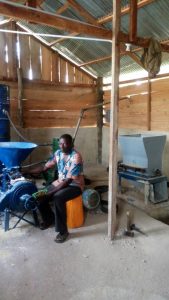 New Saviour Benin now has corn and cassava mills. The corn mill was originally installed in Mprim village, but became the subject of many disputes. We decided it was beyond us to manage this sort of thing, and removed the equipment completely.

We gave it to New Saviour Benin village, where the people are very poor but seem more disciplined. We built a new shed for the machines and bought a new lister engine. The old one was repaired and is now in good shape.

The leader of the village (it’s not an ordinary village, but based on a religion) already knew how to run the machines, so he trained the other two operators. They will all be taught book-keeping skills in one month’s time. Now it just remains to see what happens.

The President of Ghana, A Beginner Volunteer, News in Brief. 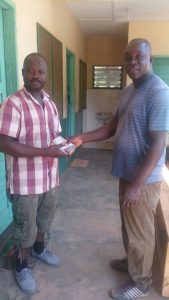 The photo shows, on the left, Emmanuel, our favourite taxi driver, receiving money sent by Paul and Dawn. They’ve very generously offered to fund an operation for his little daughter, who has a hole in the heart. As soon as Emmanuel got the money, he rushed off to Accra to register his daughter at the hospital.

Paul comments: “It’s not often people have the opportunity to completely change the course of a life and to make such a difference to a family. We should be grateful for that opportunity.”

The big smile on the motor bike belongs to Mavis, our microcredit manager. Many Ashanti women are reluctant to be seen on bike and motorbikes, but Mavis loves it, She needs to travel constantly from village to village, and the bike will speed things up no end.

Shop quality Ashanti Development honey, making its first sales. Congratulations to Dawn and Paul for working out a terrific project, which is seriously increasing the income of local people. Honey is now produced from 102 hives across sixteen Ashanti villages. 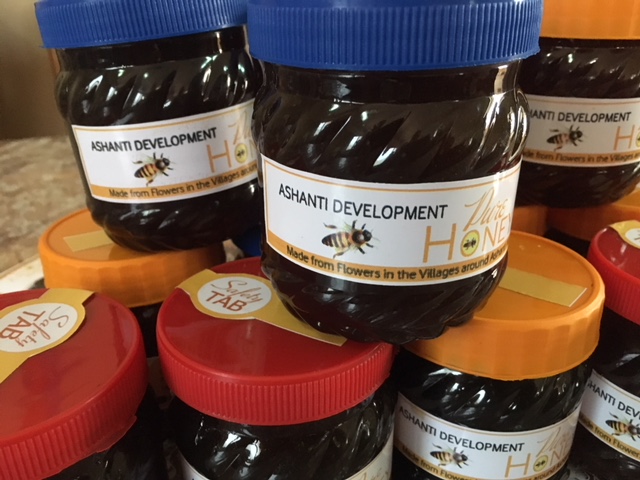